Light in the Darkness…

Sometimes in times of transition, all we can see is darkness.

With the calling for prayers for love and light and the opposite force of hatred wielding its expression through mass shooting, light and darkness seem to be at war.

In remembering the people involved in shootings over this last year, from the church in South Carolina to Orlando, a moment of silence seemed hollow for the enormity of grief. Pause yes. But all I could get to was how the microcosm of those shootings were in how we treat each other in daily life.

Many people I know pray, meditate or do yoga. Yet none of us who have a spiritual practice are immune from our own judgements, criticisms and self hatred. Some of the most disturbing people I have met have hidden behind the mask of spiritual practice. Disturbing because they know they wield great power yet use it to manipulate others. There are those that do the shooting with guns, but in our daily life, how often have you, I or we shut down our neighbor and our selves because of our own lack of awareness or worse yet, because of our own fears? The shootings appeared to refllect collective self hatred reflected outward.

To have a different perspective I took to the mountains of Appalachia, the oldest mountain range in the world. Surely amongst the ancient rocks, spring flowers and tracks of animals, there would be messages of wisdom.

When I got to the northern gates of Shenandoah National Park I prayed and called upon the animals around and beside me. I asked for an animal guide to hear me and I would listen as best I could.

It was perhaps pure vanity to think that an animal would show up just because I asked, much less when one did show up to assume it was there just for me. But I let go of whatever my judgements were and prayed that what needed to come would.

I felt a surge of energy, a scream above, a hawk appeared just as I climbed up to the northern most end of the park at 3000 feet. I got out to watch him. Below buzzards circled. I felt my heart crack open and reveled in the beauty of this magnificent bird of prey. He/she had red in its tail, power and purpose in its flying, an eye out, they messaged a bridge between above and below. I have no picture of the hawk, but I do of the wonderful flowers that appeared before me when my gaze turned away from above. 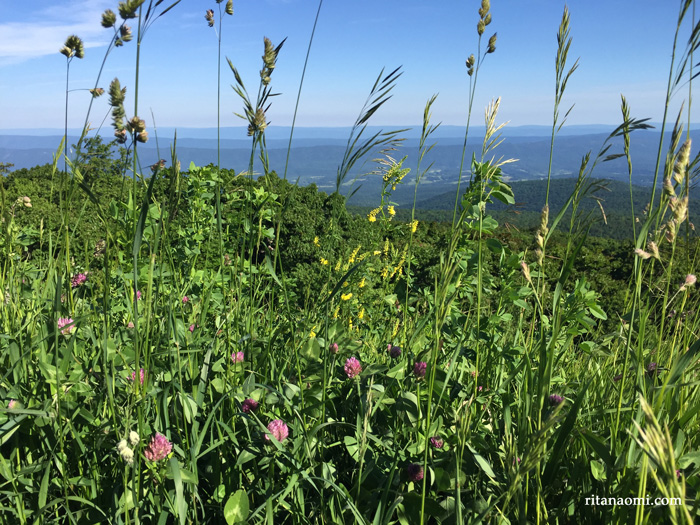 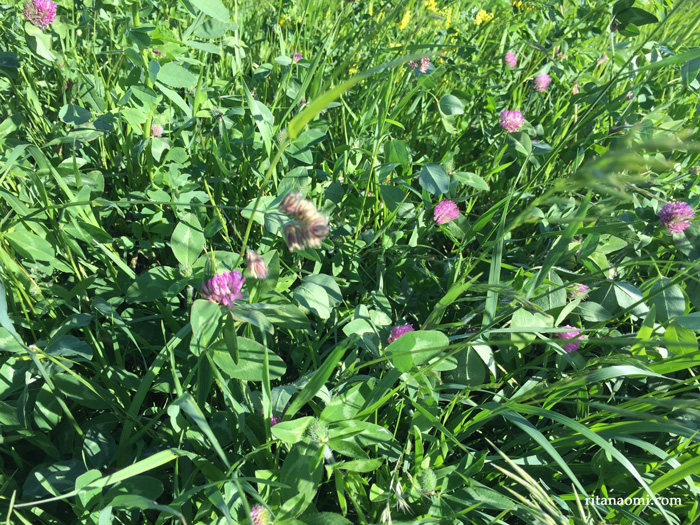 Continuing on, I pitched my tent, then took off onto the trail. Within several feet, I walked right into bear scat. 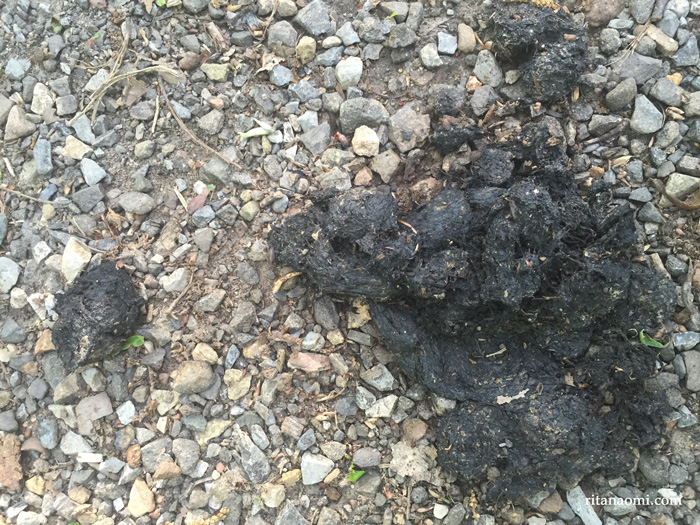 Clearly the bear was not wanting to be seen but at least let me know they were there.

I walked and walked. Until this opened before me, as suddenly and as magically as the hawk. 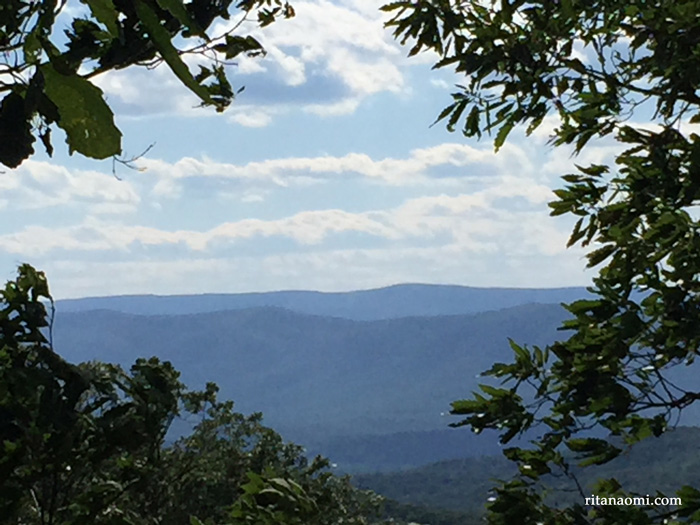 I ended up descending 1000 feet then climbing back the same 1000, 2 miles each way. As I became more quiet inside, animals became visible.

A deer appeared on my left, I could have touched my hand to her hindquarters. She looked at me with soft doe eyes, reminding me to be gentle, to live and let be in life what I could in front of me, to let go and move on when it was time. Compassion was here already she reminded me if only I took the time to slow down, this would too would reflect out, just as hate can, so can love and so can the balance between, that place of stillness that we had as babies being held by the mother of all beings.

A rabbit hopped in front of me, keeping the same steady movement directly in front of my right foot. She hopped, I took a step. No more than 4 feet in front of me, we continued this cadence for 50 feet. Her brown fur and white midriff were a beautiful contrast to the grey rocky path. She reminded me of her nature, her ability to create and procreate…to be aware that our deepest and most unconscious fears can show up in our lives and how we can react…do we follow them or do we follow the authentic call of the heart to love and be loved? The rabbit in her keeping pace reminded me to slow down and remember, we are not born to be slaves to our fears, but to live in the heart. As she bounded off, she reminded me that I too must find myself a good safe burrow to rest and recover.

I made it back to my tent just before dark, ate and went to bed. I awoke in the deepest part of night. Blackness was all around me and I felt panic rising. Something said, “Get outside.” I stepped out of my tent and there magnificent above: white hot stars streaming against the pitch black of night. 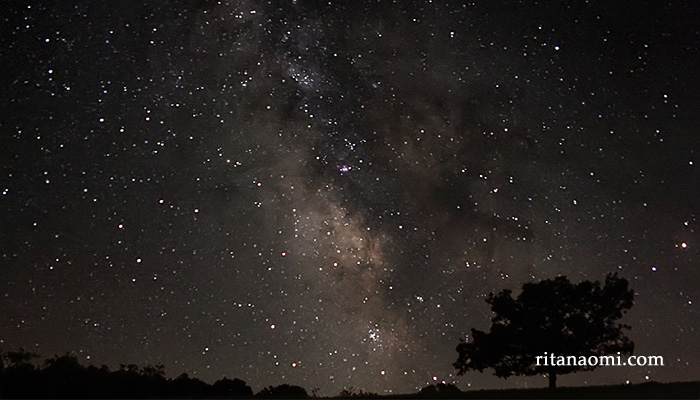 Even in our darkest moments there is tremendous beauty to be had.

Looking up to the hawk, to my side the deer, in front, the rabbit, behind the forest, culminating in the majesty of the Milky Way against the night sky. I breathed in that moment and the next, radiating out to all..may we all see the beauty and majesty that beckons to us in every moment…and in breathing remembered: through the polarity of life, there is deep stillness that is always here. 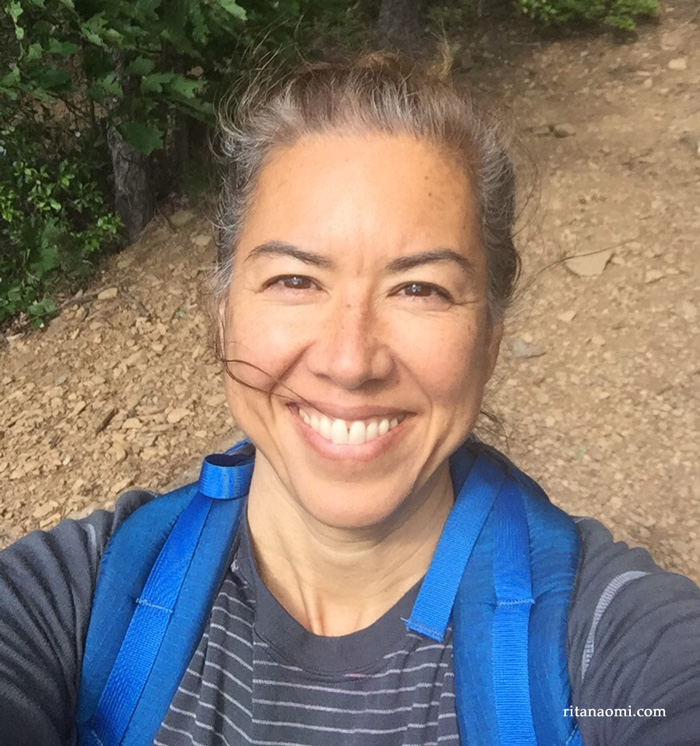