Sun rays appeared at the horizon. It was close to 600 a.m. and I was standing in tadasana, breathing in and out. Ujjayi. Dirga. I was fighting the urge to run inside.

A raven cawed, sitting on the pine with ghostly green needles, another landed nearby.

Just 12 hours before, a coyote appeared before me, 50 feet away, running across the path. It was right before sunset and as he turned to look at me, his fur burnished gold by the sun, his eyes glinting, he lowered his tail. I did not feel threatened, he did not pause, but instead kept running, turning his head away to move forward, not missing a beat.

The ranger said there would be no light by the moon yesterday evening. But as the shadow of the new moon rose and the lights faded to yellow to pink to purple to nothing, the gleaming milky radiance of the galaxies and constellations appeared, as if a god in sympathy for us in darkness below, took pity and pierced the great bowl of darkness with brilliant diamonds.

We had gone swimming at sunset, the warm spring water flowing out of the furnace creek, feeding the pool and surrounding flora and fauna.

We made new friends at the pool in the afternoon, Michal and her two kids, Dave and Charlotte, and they met us there again. Michal had just finished her law degree, and like many mothers I’ve met on this trip, a variety of life situations put her in the role as teacher and mom to her kids. They had just moved here from Orange County, Ca, her husband had just taken a job here in Death Valley. There was a very tiny but vibrant community here, if there were more than 7 kids, the state would re-open the elementary school at Death Valley, but for now, it was just her as teacher and playmate. When it was time to leave the pool, we offered them a ride home, even though it was just 1/4 mile away… it was pitch black and Michal had observed a group of 10 coyotes and did not wish a run in with small children on the walk home. We piled in the car, conversations of dogs, scorpions and what it was like to live in one of the hottest places on earth filling up the car and my mind.

And now up again at 4:30 to pack. Yoga and metta practice at 5:30. My mind temporarily filled with “what if a scorpion runs across my mat and I step on it. What if a pack of coyotes comes…” 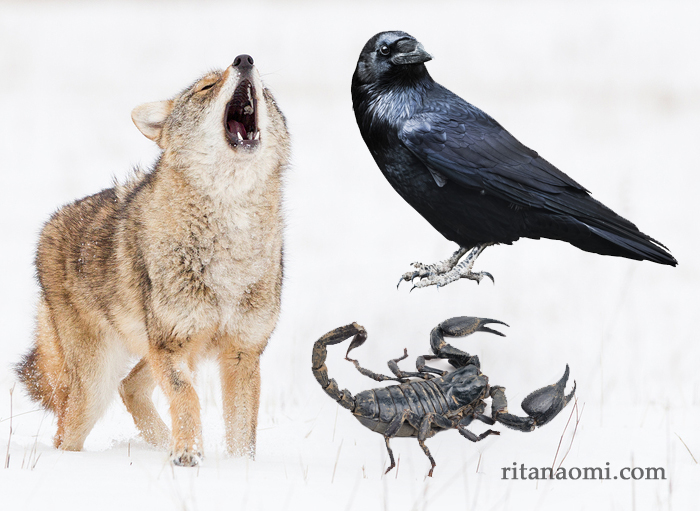 Breathing in deeply, I heard a coyote yip from far away. Exhaling, the Raven swooshed overhead. Breathing in, my hands moved into prayer Mudra. Breathing out, I whispered “thank you God for all that is here and all that blesses me, my friends, my family.” Breathing in then out, I moved into warrior 1, 2, trikonasana, warrior 3 and a series of poses that captured me in the rhythm of a familiar pattern, set in an unfamiliar place.

Coming together I fell back.

Back, I fell back, into that place in the heart where the coyote calls, the Raven caws and the scorpion with her 8 tiny eyes sees clearly in the starlight, that place that all creatures call home.