Nature and Cultural Awareness Journal May 17, 2017

We have been here for 3 days now, our first night spent in an RV park just outside Bryce national park. We made our way from Southern Utah and Lake Powell, through parts of the vast and majestic Grand Staircase-Escalante National Monument, Kanab, eventually getting to Bryce Canyon City. Thankfully we made reservations several nights before at the RV park as everything was sold out inside and outside of the park.

Luckily for us, we got a spot in the overflow part of the park next to a very large indoor pool and hot tub. (“Let’s go, Mom!”) There were of course Bureau of Land Management sites we could have explored, but as my backing up skills with the trailer were still in learning mode, and my rig was now 34 feet long, I didn’t want to take a chance getting stuck in the middle of nowhere, in the bone chilling cold (20’s at night), at high elevation.

When we got to the site, I pulled the trailer in to the spot, getting out with Robbie to assess the trailer to make sure it was level – the RV 3 way absorption fridges must be level to work; if the road surface is uneven, you must put in a leveling block. Once parked and initial leveling met to his satisfaction (bubble on level centered), Robbie immediately set to his chores: putting in the chocks to stop the trailer from rolling front or back, checking the levels on the front and side of the trailer to make sure it was still fairly even, once even, disengaging the hitch from 5 different points (battery power, chains connecting trailer to van, wide distribution bars, 5 sets of pins), and manually hand cranking the trailer on to its stabilizing jacks. As I surveyed his work while simultaneously setting up our beds and getting dinner on the stove, I noticed a large bulge pressing out of the sidewall of the trailer’s right tire. F*@*! I said silently to myself. The only mechanic in town was not open until Monday, 2 days hence, but the trailer was up on jacks fairly sturdily. Feeling low blood sugar setting in, exhaustion, and the cold from the temperature dropping from the 50’s into subfreezing fairly rapidly, I helped Robbie finish up in favor of the two of us eating a quick snack and hitting the hot tub immediately. He readily agreed. We both were still encrusted with sand from getting stuck in the wind storm on the beach at Lake Powell earlier that morning. It was time to wash it off!

A very chlorinated but happy soak and shower later, we came back, ate a hot dinner of sauteed veggies (me), hot dog and carrots (him), and went to bed.

At 2 a.m., “REEEEE! REEEEEE! REEEEEE!” The propane alarm went off. It took a few moments for me to figure out which alarm it was and to locate it. I turned off the water pump and ran outside to shut off the propane. I left the door open to let in air despite the fact we always sleep with ventilation. The brand new carbon monoxide detector and smoke alarm were both working fine and green. Since buying the trailer in February, we had spent the last several months learning to live and operate in this tiny home with an on demand water heater that runs on gas and electric, a fridge that runs on 3 sources of energy (gas, electric and battery), a toilet/shower/sink with 3 different types of tanks that are filled by a very loud water pump that is run by propane, and a few other odds and ends like learning to set our home up with solar. So in the midst of all this, I was never shown (that I remember) that I had a propane alarm that was located under my platform bed, 6 inches from the floor in the farthest reaches possible. As I thought about where the piercing alarm shriek was coming from with the cold air blowing in gusts through the door, clearly below freezing, the alarm stopped.

Robbie stumbled back to his own bed, having joined me for warmth pre-alarm in mine, and I lifted the platform base of my bed up. Ahhh. A little brown box by the fuse box. Right on. Thank you. It was glowing green, no more need to mute. I made a mental note to find a place with internet to read up on it in the morning.

We spent the night without further trailer incident. Instead bizarre images of white gravestones peppered my dreams, gravestones like those in Arlington Cemetery. I kept finding myself standing over them, above them, near them, gazing upon them. Not scary, more telling, with a feeling of insistence behind the dream, pushing at me to pay attention to my surroundings.

We took off early the next morning after a hearty breakfast for Robbie and a read up for me on propane alarms. The most consistent advise on the R-pod forum being: they tend to go bad very easily, and be careful about letting your dog sleep next to them because any kind of gas will set them off. Having no dog, but being unsure of just how old the unit was, knowing it had been on a recent jaunt on a bumpy beach, and that the propane tank/diaphragm/valve had been replaced a month ago, I felt reasonably sure that it was probably the propane alarm unit and to go off to Bryce with Robbie.

We made the first ranger talk of the morning on Geology right at the Sunrise rim over the Navajo Trail. 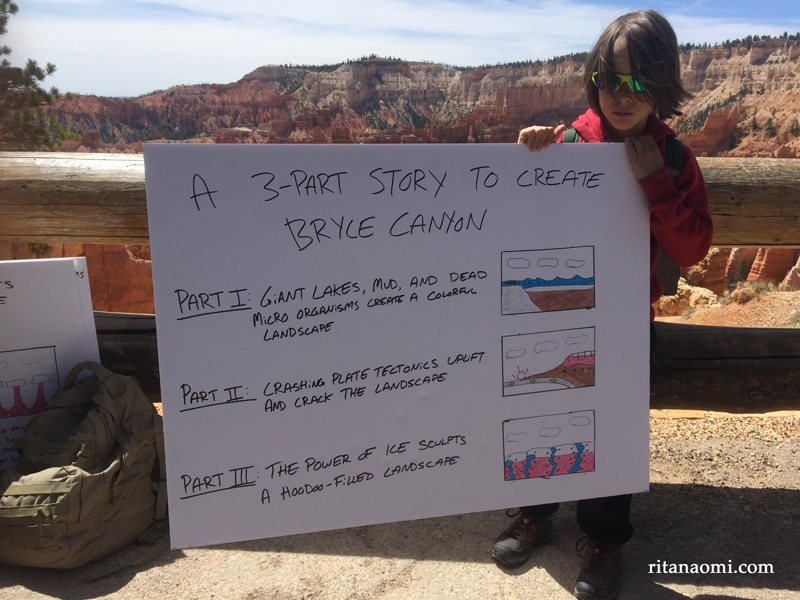 One of the first things out of the ranger’s mouth was: “to understand the geology of this canyon and how it is different than Zion and unlike anywhere in the world, please note that the canyon was once a vast lake. Over time, creatures living in the lake died, their remains and organic matter settling to the bottom forming a silt and eventually deepening and hardening to create the bottom of what became the canyon floor.” 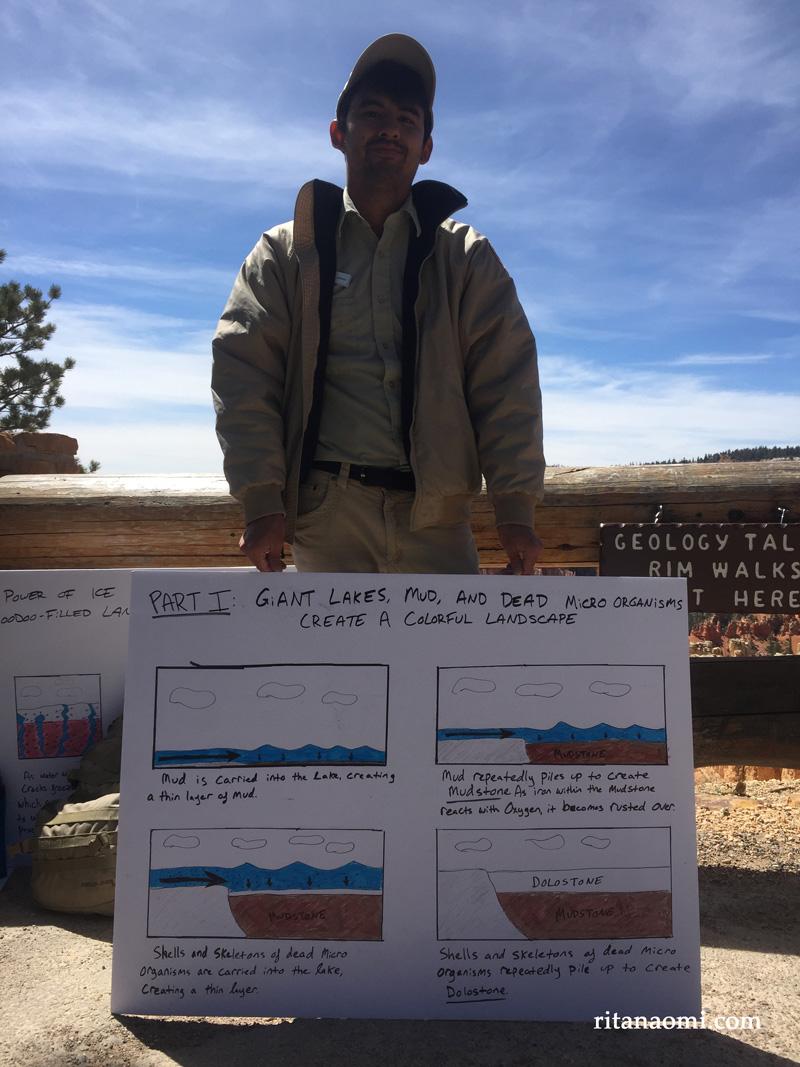 He went on to say, “Over time when the tetonic plates under the lake floor collided, this created a massive surge upward of this lake valley by several thousand feet. In this canyon alone, we have over 200 nights a year that are subfreezing. Water gets into the cracks of the rocks, freezes over night, a very powerful force that causes the rocks to erode and break apart. Because of the different layers of rock forming this area, the top layer made of limestone (ancient organic matter or as Robbie called it “skeletons Mom! Isn’t that awesome?) and the other layers such as the redder stones with varying degrees of hardness and porosity, started to break apart forming the “hoodoos” we now see before us.” 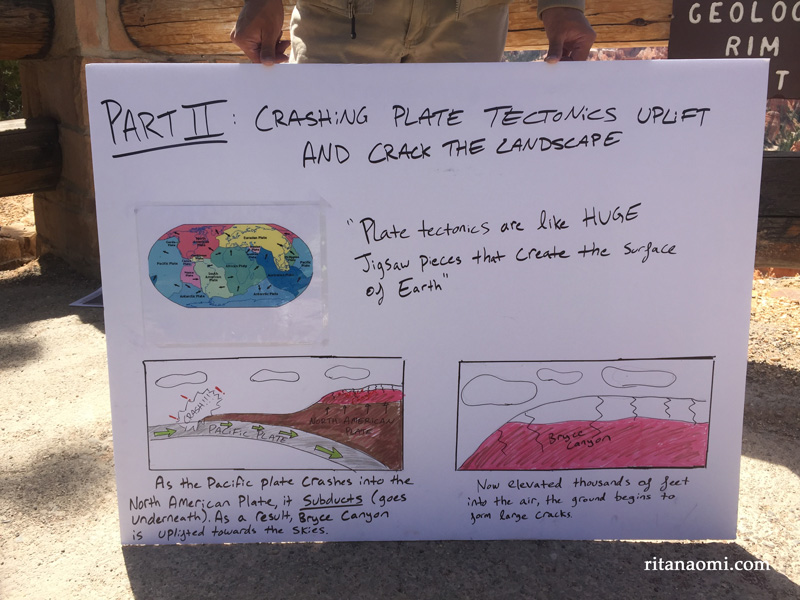 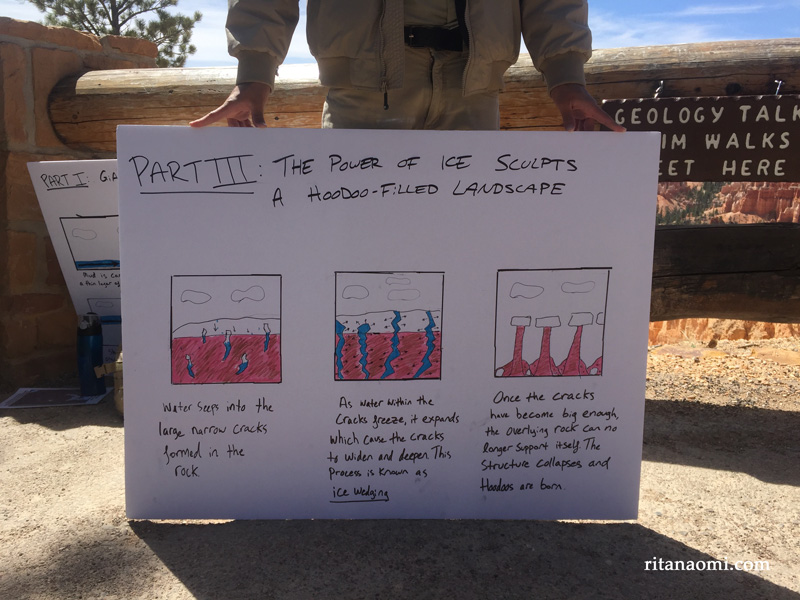 My white cemetery gravestones appeared in all their natural beauty before my eyes. 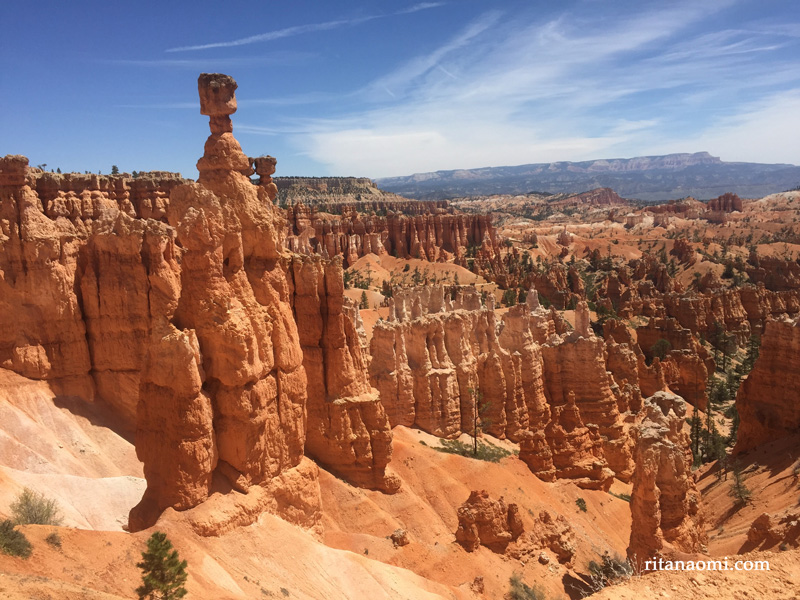 Robbie and I made up a haiku, tapping out the 5-7-5 rhythm with our feet and hands while dancing around the rim of the hoodoos:

Skeletons are cool.
They make capstones white and bright,
beautiful and peaceful!

Our ranger agreed to take pictures with us, it was his first Geology presentation and he stayed up most of the night getting ready. All of us were a little kookie and happy. 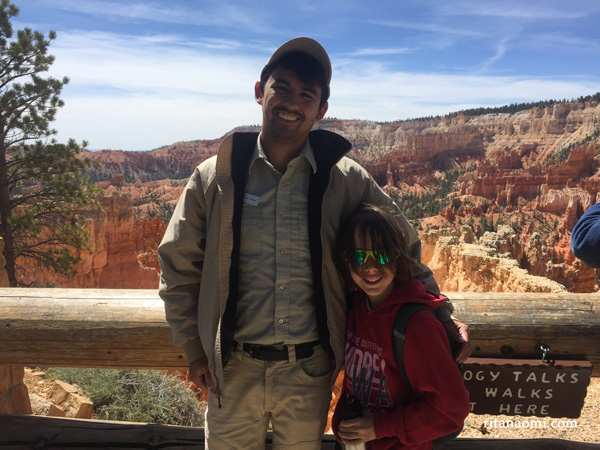 Perhaps it was the high elevation. But we decided it was time to rest, take in our surroundings, and be still.