We continued on down through the Big Horn mountains, the scenery gradually changing. The geology  was similar to Needles highway (see Needles highway post) in Custer State forest.

Robbie and I talked this morning about the elements of earth, water and air. All of them move, have their own stories and histories, magical and alive. Here in the canyons the grey rock formations appeared like earthen standing guard allowing us passage as we traveled west. 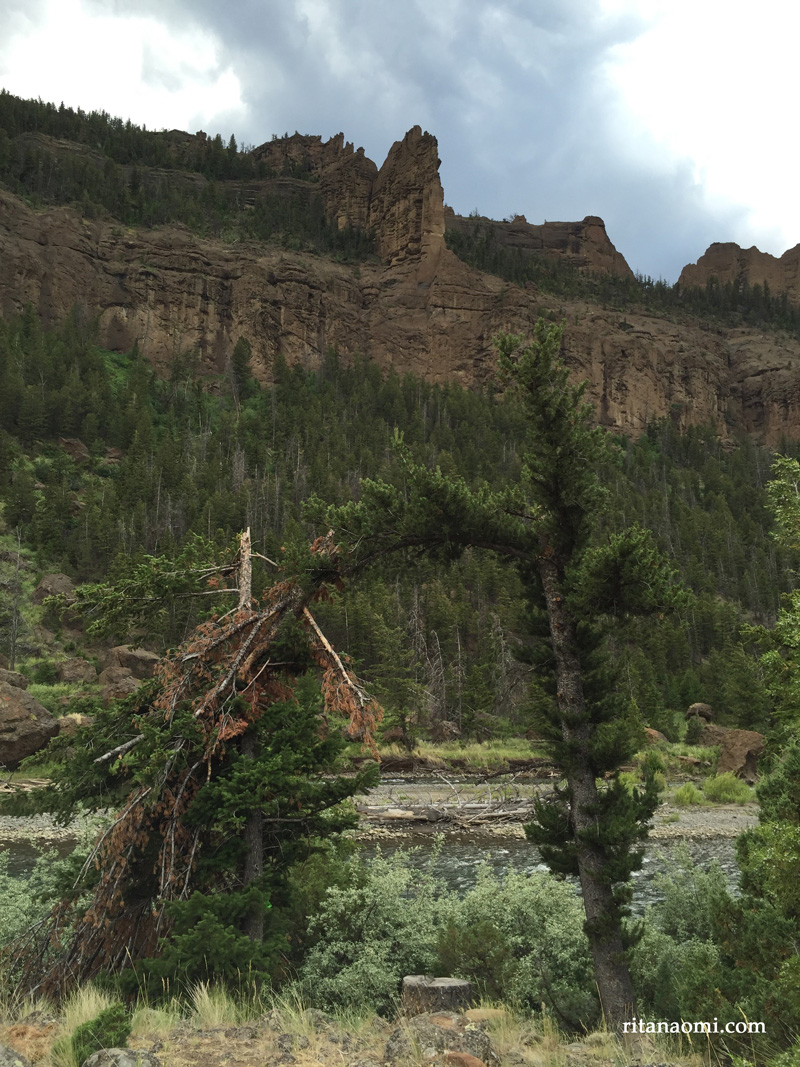 In these canyons and ravines it’s not hard to imagine that these mountains speak. The waters of the Shoshone River babbled, rippled, and gurgled singing her song as we listened. 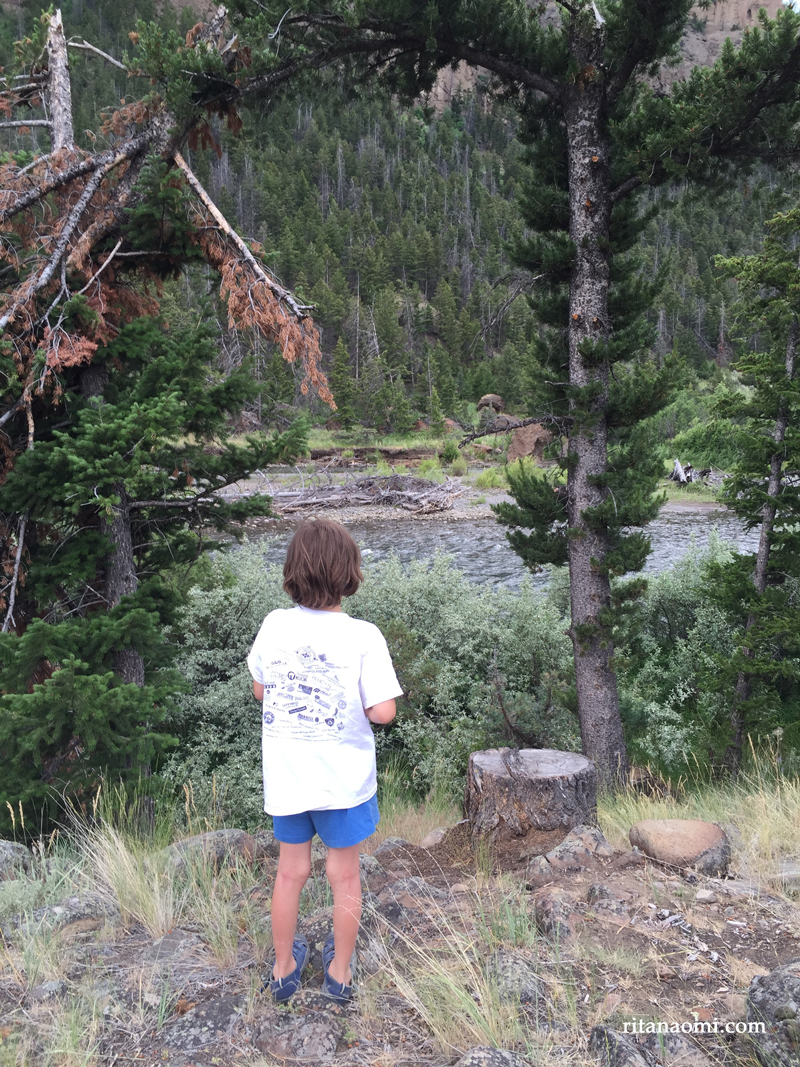 We made it to Yellowstone but the campgrounds were full. So back east we went.  Unlike Big Horn where camping was allowed 100 feet off the road and 50 feet from streams, anywhere really, the Shoshone national forest provided tent camping sites by the Shoshone River, beautiful and perfect. 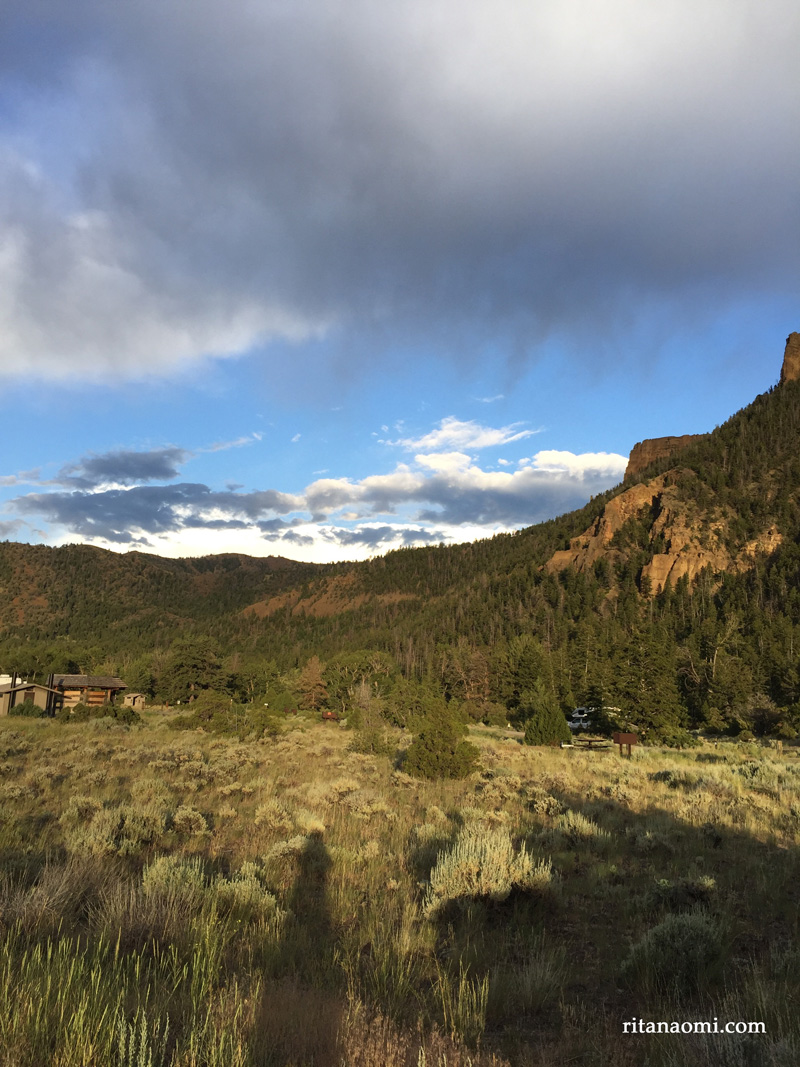 We backtracked 15 miles because the first 2 campgrounds were along the river where the rainbow trout spawned and the Grizzlies were out in force. Tents and pop ups were not allowed.

As we drove in, a young woman, Mahtaab, walked by, “Heh, I recognize you from Shell Falls!” It turns out she lives several miles down the road from us in the Washington D.C. area.

We invited her to dinner, but as we sat down, the wind picked up and rain began to fall. Huddled in our tent, gale force winds began to blow, before we knew it, half the tent was uprooted, 2 stakes gone forever. Mahtaab is a rock climber, she taught me a wonderful knot as we pounded different stakes into the ground. Robbie was a trooper, using all of his body strength to hold the tent as the winds started to pick up.

The wind settled, her story done for the evening and Mahtaab left in search of cellular to call her family back home. Robbie and I sat outside, looking at the sky. Listening to the subtle currents of the evening wind, her temperature integrated with that of the hot earth, soothing her fiery gusts. The river waters rippled in the background.

We made s’mores, deciding chocolate and marshmallows were perfect without the graham crackers. 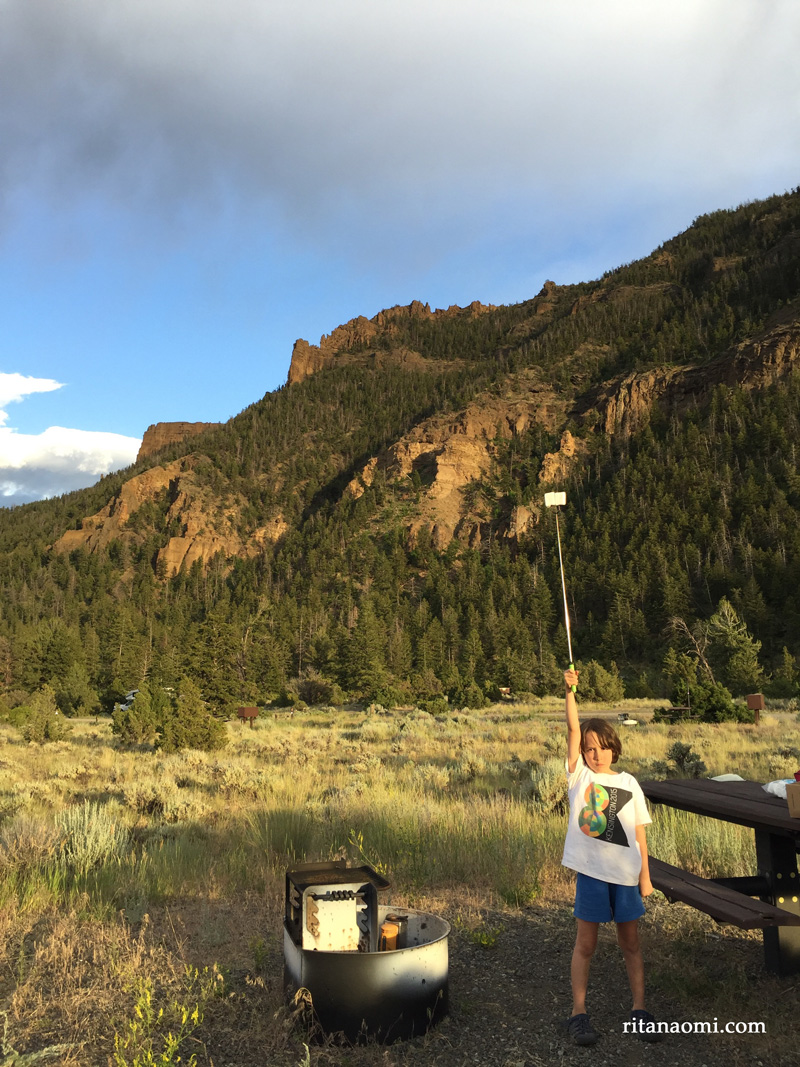 Night fell calling us to back to our tent and bed.

In the distance a wolf called to her clan. She called and called again. There was no baritone response to her call, only the stars twinkling as they emerged from behind the sun’s fall.

As Robbie slept, I awoke deep in the night to an elk sounding its strange high pitch call, answered by another. And before even the sun’s rays touched the horizons, the birds called out their song, bringing us into the new day.

I went outside with my yoga mat, aware of the profound sacredness of life. Bowing to the east as the sun rose, to the south who gives us sight through the day, the north who gives us shelter and shadow to balance the light, and the west for where we say good bye and let go…The earth rose, the water flowed, the wind breathed and I gave thanks. We were headed west to Yellowstone.